The whole area of Pub Dubina is accessible for the public all the year through and everyone is invited to spend their leisure time here. 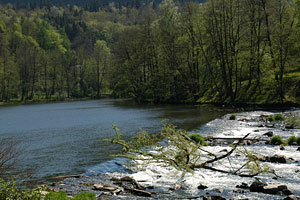 Apart from the basic services of the restaurant, the camping-site and the boarding-house we also offer:

Dubina and its surroundings 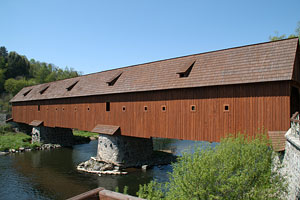 The chronicles tell us it was founded on the territory of a cloister in 1203. The remnants of a fortified settlement date back to late 13th century. According to the old local tradition a cloister used to stand here. From the fortification the lines and part of the dwelling houses have been preserved.

Dubina lies 340 m above sea-level and the number of its inhabitants is 139 at the moment. The village belongs to the locality of Šemnice.

Not far from the village of Dubina there are calcite caves named Rocks of Sprites lying 517 m above sea-level. This rare geological locality is formed by Tertiary volcanic basalt eruptive rock and there are about 60 cylindrical cavities of some centimetres to 1.5 m in diameter here. The holes are 5 m deep. The origin of these special hollows is unclear up to now, most geologists suppose the mysterious cavities came into being by disintegration of tree stems inside volcanic sediments.

Heinrich Mattoni had the Look-Out Tower of Bučiny built about 1880. It was named after the beautiful beech forests surrounding it. From this place there is a fine view of the valley of the River Ohře, a part of the locality of Kyselka and the middle part of the Krušné hory (the Ore Mountains) with Klínovec, their highest peak.

The locality of Kyselka lies 2 km far from Dubina in a narrow wooded valley of the Ohře some 340 m above sea-level. The beginning of spa business and the development of the locality as a spa dates back to late 18th century. In 1829 the estate was purchased by Baroness Antonia von Neuberg. Her husband Wilhelm v. Neuberg became the founder of the spa of Kyselka. Since 1873 Kyselka was owned by the entrepreneur H. Mattoni who gained recognition for the greatest fame of this small spa. The spa business ceased to exist after 1989. Until recently, also the spa buildings, quiet witnesses of the once famous and pompous spa architecture, were endangered by total destruction. A big chance how to preserve at least parts of the past splendour has been the initiative of the company “Lázně Kyselka o.p.s.” and the “Union of the Associations for Preservation and Development of the Cultural Heritage of the Czech Republic”.

The surroundings are dominated by the Rock of Šemnice with its 641 m above sea-level. It is a clinkstone cone of eruptive lava of an extinct volcano. At the top of the rock a cross was erected which according to a legend commemorated a lucky rescue of a young girl that was pursued by an evil knight from Andělská hora. The girl found her refuge on the rock while the villain and his horse crashed. From the top you can enjoy a wonderful view of the middle Ore Mountains, of the Ore Mountains in the distance and on the opposite side you can see the castle ruin of Andělská hora.

The ruin of Andělská hora on the towering clinkstone rock is not easy to overlook. It has become a popular place for trips ever since. The castle, originally called Engelsburg, was first mentioned in 1402 as it belonged to the lords of Riesenburg (Osek). The castle image changed considerably with late Gothic reconstruction made by the lords of Plauen at the turn of 15th and 16th centuries. Most remnants of the castle architecture that can be seen till now date back to that time. The castle was longest in the ownership of the Černíns, namely from 1622 to 1734 and from 1868 to 1945. Since the time when the residence and the administrative office of the lords moved to Kisibel (Stružná today) in late 16th century, the lords changed their address moving there too and the castle started to dilapidate. During the Thirty Year´s War it was plundered by the Swedes and the destruction was completed by fire in 1718. In 20th century the ruin was used by film producers when shooting the scenes in the movie “Ballad for a Bandit”.

…… and of course the world-known spa of Karlovy Vary (Karlsbad).

Canoeing on the River Ohře 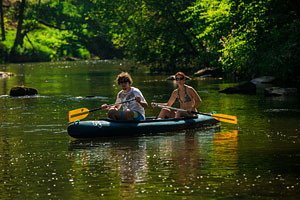 The River Ohře rises from Bavaria/Germany, enters the territory of Bohemia near Cheb and ends with the confluence with the Elbe at Litoměřice. The stream of the Ohře is 316 km long, 246 km of them on the territory of Bohemia are navigable. The great advantage of the River Ohře is its practicability throughout the year. Dubina lies on its middle stream on 163rd river kilometre. This segment belongs to the most enjoyable thanks to numerous rapids and to the most beautiful thanks to the range of the Doupovské hory (the Doupov Mountains) that is water-locked by the River.

For our hunting guests 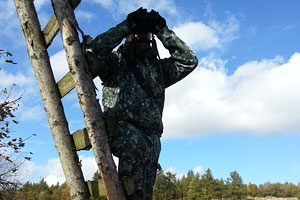 Thanks to close vicinity of the Doupov Mountains, where also the military area of Hradiště is situated, Dubina becomes a starting point for our hunting guests. Our boarding-house can offer them accommodation, breakfast, dinner and first of all a real hunting atmosphere.

For bikers and hikers 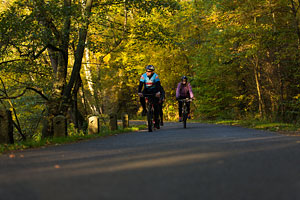 Bikers and hikers can enjoy apart from refreshments also a pleasant rest on their tracks, e.g. using all outdoor areas and their equipments (benches and little tables, grill sites, children playgrounds ...).